I love a good story and Tuscany is full of them!

My latest Tuscan miniature painting is set at the site of a fantastic one!

In the 12th-century, a wealthy soldier named Galgano Guidotti received visions of the Archangel Michael asking him to give up his life of wealth and violence, and instead adopt a new one of piety and service. In one version of the story, Galgano doesn’t believe he has the fortitude to meet this holy request. He cries out to the Archangel that it would be as impossible for him to give up his wealth as to split a stone with a sword. When he goes to demonstrate for effect, his sword miraculously cuts through the stone like butter, and becomes embedded. In a second version of the story, his horse takes him to the hilltop of Montesiepi against his master’s wishes, and upon seeing the Virgin, Jesus and the 12 disciples waiting for him there, he marks the holy area with the only cross he can fashion – his sword thrust into a stone.

Galgano did convert and prayed every day at this stone, until a proper chapel was built over the site. Many have tried to pull the sword from the stone, but it has not budged. And the sword in the stone is still there! It’s been authenticated to the 12th-century, and these stories are the only documented answers to the mystery of the sword. This is said to be the original inspiration for the fictional Arthurian legend of the sword in the stone.

I had to visit this chapel as “The Sword and the Stone” animated movie was one of my son’s favourites as a child, and in 2011, I got the chance. Many people go to the ruins of the Abbey of San Galgano in the valley but don’t venture up the hill to the small unassuming chapel. It’s an extraordinary place – while dark and a bit sombre, it certainly has that air that something amazing happened there.  I got a little teary-eyed when looking at the sword, wishing that my son had made the trip, and also thinking about the story’s message of miraculous change and redemption. As I stepped away from the sword, I turned toward the chapel door and saw this view – daylight streaming in from the Tuscan summer landscape into the chapel darkness. I was quite overcome – ever have one of those moments?

I stood at that doorway for a long time, thinking about change and the beauty of the story. I left the chapel very much wrapped up in my feelings, and only realized at the car that I hadn’t taken a single picture! Thankfully my husband had, and he got that exact picture of the doorway that is now my 120th miniature, “Through A Tuscan Portal”.

And here are a few of our photos from the visit: 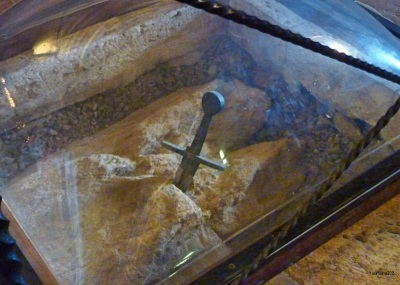 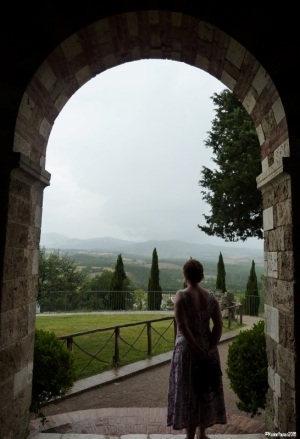 I’m Lost In Thought at Montesiepi

The original miniature, “Through A Tuscan Portal”, has now sold.

By Art We Wonderful by Marion Younan
On April 13, 2018
Leave a comment 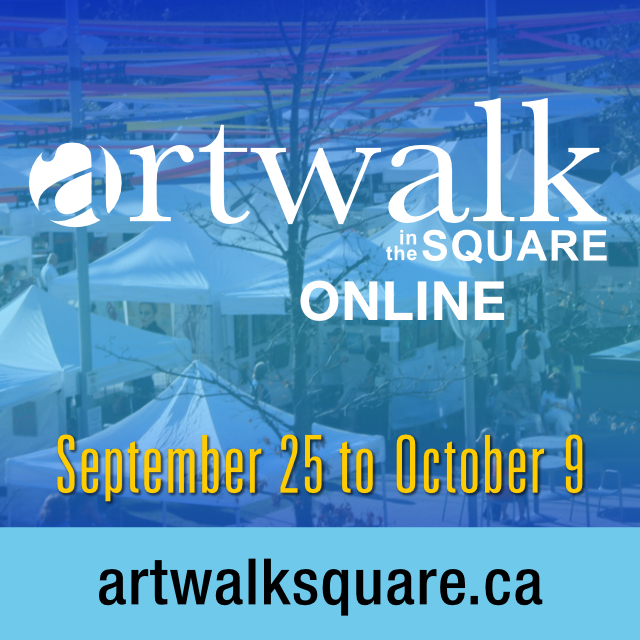 A Signature of Italian Summers

When travelling in Italy, let it be known that we brake for sunflowers! Whenever we find a field, it’s very common for us to pull our rental car over to […]
A Signature of Italian Summers

Mother’s Day, 2017. Orvieto, Italy. I’m alone and missing home. I awake early and decide not to linger over coffee, but instead head out into the streets to explore and […]
Sunday Morning In Orvieto

The best journey takes you home.  My art practice is inspired by travel, specifically recreating those travel moments where I (and others) have been moved by memorable encounters and extraordinary […]
County Roads, Take Me Home

Three years ago, I visited the National September 11 Memorial in New York City. It’s an incredibly moving and powerful place – have you been? For me, it produced all […]
Nineteen

Look what I found in Cherry Valley, Ontario this summer! While on a recent trip to Prince Edward County, we came upon this vintage Texaco station that someone had […]
A Big Bright Star

…sometimes the greatest memories are made in the most unlikely of places… -J. A. Redmerski Her father loved to take photographs. She often didn’t understand why he took the photos […]
Her Father’s Eye

For my July stay-cation, I headed to the region of my childhood, Eastern Ontario, and decided to be a tourist. I visited a number of sights that brought back memories […]
Built To Last

Can’t Be There? Sketch It Anyway!

According to my itinerary, I’m supposed to be in Tuscany right now on a bit of a sabbatical. The plan was to take some time in my favourite travel destination […]
Can’t Be There? Sketch It Anyway!
%d bloggers like this: