A priest, a barrel-maker, and a lawyer!

I can’t come up with a decent “knock-knock” joke to follow, sorry folks! Who are they? These three constructed the buildings where I found my latest miniature ink and watercolour door subjects this past summer in Montréal (Québec, Canada). And luckily, the city has kept some great historical records on these buildings.

The first door is from the oldest building in Montréal, the Saint-Sulpician Seminary, started on this Rue Notre Dame site in 1685, and is still a seminary today. On one side of this old stone building is the famous Notre Dame Basilica, and it looks right at home beside it. However on the other side is a very modern-looking downtown with high rises and Starbucks! Doesn’t this door look like it belongs in rural France? Not really that unusual I suppose because, back in 1685, this setting might have looked like rural France!

The second door belongs to a 1757 building that was the home of a cooper (barrel-maker) for the military stationed in barracks across the street on Rue Saint-Paul. The cooper, Eustache Prévost, did his work on the ground floor (window with iron bars), and his family lived above. In the following years, it was also an inn, a rooming house, and an apartment building with a snack bar! After several renovations, it has been restored to a single family home. I’m always tempted to ring the doorbell to ask if an inside tour is possible!

The third door sits on a 45-degree angle in its corner building on Rue Saint-Paul at Bonsecours. This building is the “youngest”, started in 1831 by a lawyer, William Walker. But within 2 years, he had sold it to a judge, who sold it to another lawyer, and then it became a commercial space. It’s been a dry goods store, a haberdashery, a hotel and in the 1960’s, an avant-garde theatre! Restaurant businesses have now taken over the space in recent years – one, who painted a lovely seraphim angel on the door’s window.  I loved the well-worn look of the facade, and its determination to stay current with its chalkboards, flowers and posters. 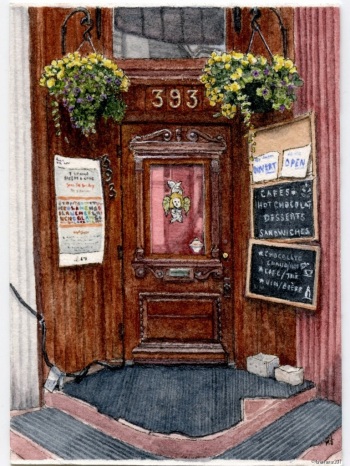 When I paint doors, I can’t help but wonder who might have opened, locked, and banged on these doors. In most cases, my imagination has to fill in the entire story , but with these Montréal doors, I got a glimpse into who might have gone knock-knock!

By Art We Wonderful by Marion Younan
On October 29, 2017
2 Comments

Travel With The Ones You Love

Never go on trips with anyone you do not love. Ernest Hemingway What has your experience been? Would you agree? Having done years of art shows, talking with thousands of […]
Travel With The Ones You Love

Over these last few months housebound, I’ve definitely become one of the millions who has taken up the new practice of “Couch Travelling”… far more than is recommended. I find […]
La Dolce Vignetta

On this Earth Day 2020, I’m reminded and grateful for how beautiful a spring day can be… even when we are sheltering indoors. The trees outside my kitchen window are […]
Springtime in Toronto

The Last Time I Saw Florence

On the bright January 1st morning, I grabbed my painting kit along with a freshly-brewed cup of espresso, and headed out to the apartment terrace to start my year with […]
The Last Time I Saw Florence

One of my favourite things to do while in Italy: […]
Taking A Coffee Break in Italy’s Big Cities

Taking A Break By The Ligurian Sea

Until we meet again soon!   (Video: my ink and watercolour miniature and larger works; music is “I Giorni” by Angele Dubeau & La Pieta)
Taking A Break By The Ligurian Sea

In these difficult times, I’m doing my best to find moments of lightness. What about you? Making art is helping. Making art that reminds me of lighter times helps even […]
Park It Awhile

Watching the news coming out of Italy is heart-wrenching and surreal. If you’ve been following this blog, you’ll know that I’m deeply in love with Italy. I have painted scenes […]
Forza Italia
%d bloggers like this: