Do Your Eyes See or Feel?

At a recent art show, some visitors to my booth asked if I had done any pieces of the neighbourhood we were in. I had, and showed them the two pieces. Both were of doors, two of many lovely ones on the streets surrounding the art show park.

These visitors were very generous with their positive comments, and spent several minutes looking at the pieces. I shared with them how I thought this neighbourhood was one of the most beautiful I’d seen anywhere. Then one of them answered with some visible anger about how the beauty of neighbourhood was being ruined by the city’s oversized garbage and recycle bins. Because these bins are so large and the houses are so tightly positioned together, residents have had no choice but to put the bins out front on porches or in their front yards.

I then shared with them that I hadn’t noticed at all, until I went to paint one of those doors that had a bin out front. I said that I couldn’t decide if I should leave it in or not. They said that it was a good decision that I had left it out. I then said that I hadn’t – it’s in the painting. They re-examined the painting in question and were surprised that they had missed it on their first viewing. Maybe they actually DID see it subconsciously which sparked the conversation in the first place, or they didn’t see it because, as per the Klee quote above, their “feeling” eyes were operating more strongly, seeing the beauty first and not a garbage bin.

I probably shouldn’t have shared this story because now you’ll likely ONLY see the bin in the piece!

But I like this notion of a Feeling Eye, and I think it’s probably my dominant eye most of the time. As long as the Seeing Eye knows to take the reins for driving, selecting vegetables and make up application, I’m okay with that! 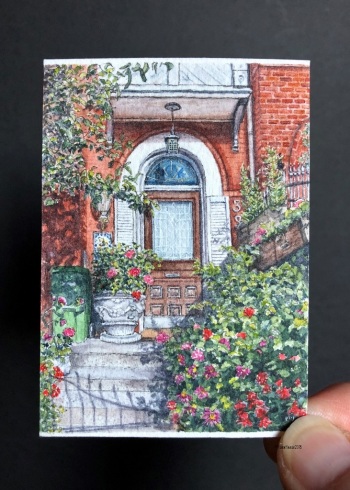 By Art We Wonderful by Marion Younan
On September 22, 2018
2 Comments

Lost In Those Views… Again

As the world opens up to travellers again, where’s the first place you’ll go? I’ve seen this prompt a lot lately on social media, as vaccinations roll out and we’re […]
Lost In Those Views… Again

Lucca From The Guinigi Tower

I have a tremendous fear of heights. Over the years, I’ve followed the advice to face that fear, and I’ve forced myself to go up to high places. Each time […]
Lucca From The Guinigi Tower

Who loves Aperitivo time? Before 2006, I really had no idea what it was! Aperitivo is a pre-dinner drink usually accompanied by a bevy of small snacks. Some of you […]
Good Company, Good Cheese And A View

I heard on TV yesterday that spring is a month away. What? During our pandemic lockdowns, time has taken on this new characteristic of seeming to move simultaneously at a […]
A Sign Of Spring

The first time I saw Camogli was nothing more than a quick glimpse from a train in 2006… and I was smitten. As the train to Milan slowly pulled into […]
Fourth Time’s A Charm!

At the beginning of this new year, where is my heart taking me? To an artist’s house, high above Spoleto Umbria, on a sacred mountain visited often by St. Francis. […]
2021 Drops Of Inspiration

This past April, I bought a gratitude journal… my first ever. I bought it because I could feel myself slipping into a darker place as the pandemic rode its first […]
A Short Year-End Reflection

How much does food figure into your travel memories? I can remember places vividly by the food and drink I’ve had. And with my recent miniature series, those delicious memories […]
Italian Coffee Stories
Loading Comments...
Comment
×
<span>%d</span> bloggers like this: