Home Is Often Where The Beauty Is

This past weekend, I took part in a large outdoor art show in downtown Toronto. Thousands of people attended, many of whom were visitors from other parts of the world. They had glowing things to say about Toronto, and naturally were very interested in my Toronto pieces. And they would get downright giddy when choosing from my selection of Toronto-themed business cards, showcasing the CN Tower or the red streetcars of the transit system.

Seeing a visitor’s exuberant reaction to the city reminded me just how often “home” gets taken for granted. In the same way a Roman no longer marvels at the Colosseum or a Parisian at the Eiffel Tower, I sometimes overlook the beauty of my home surroundings… that is, until it shakes me out of complacency.

And I didn’t expect Toronto to do that shaking on a greyish day in February! No snow around, but the residual puddles from a recent melting reflecting the cathedral down the street. The random interior lights twinkling in the office towers, giving them a little sparkle. The rows of streetlamps standing guard on the sidewalks of King Street East. And just as a photo was taken, the red 504 King streetcar whizzed into the shot, filled with people on their way home. When I saw the photo, I was so taken with how atmospherically beautiful this city can be! And in February!

As a reminder that there is beauty all around me here at home, I drew and painted my 133rd miniature painting from this photo. And it was one of those pieces at the art show that got lots of attention, and quickly found its forever home with an appreciative collector from… Toronto! 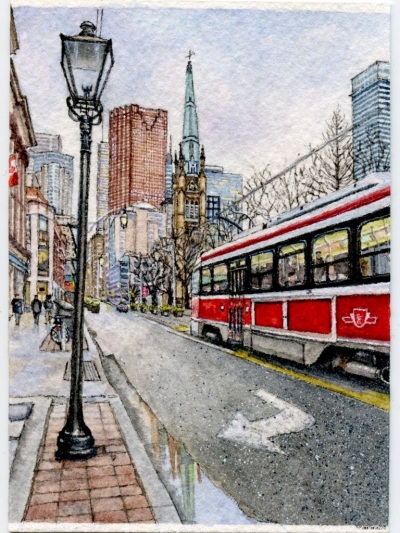 Travel With The Ones You Love

Never go on trips with anyone you do not love. Ernest Hemingway What has your experience been? Would you agree? Having done years of art shows, talking with thousands of […]
Travel With The Ones You Love

Over these last few months housebound, I’ve definitely become one of the millions who has taken up the new practice of “Couch Travelling”… far more than is recommended. I find […]
La Dolce Vignetta

On this Earth Day 2020, I’m reminded and grateful for how beautiful a spring day can be… even when we are sheltering indoors. The trees outside my kitchen window are […]
Springtime in Toronto

The Last Time I Saw Florence

On the bright January 1st morning, I grabbed my painting kit along with a freshly-brewed cup of espresso, and headed out to the apartment terrace to start my year with […]
The Last Time I Saw Florence

One of my favourite things to do while in Italy: […]
Taking A Coffee Break in Italy’s Big Cities

Taking A Break By The Ligurian Sea

Until we meet again soon!   (Video: my ink and watercolour miniature and larger works; music is “I Giorni” by Angele Dubeau & La Pieta)
Taking A Break By The Ligurian Sea

In these difficult times, I’m doing my best to find moments of lightness. What about you? Making art is helping. Making art that reminds me of lighter times helps even […]
Park It Awhile

Watching the news coming out of Italy is heart-wrenching and surreal. If you’ve been following this blog, you’ll know that I’m deeply in love with Italy. I have painted scenes […]
Forza Italia
%d bloggers like this: