On my spring trip to Italy, I learned about a fascinating Italian woman named Matilde di Canossa. A powerful leader, an accomplished soldier, an ardent negotiator, a devout Catholic, a loyal ally. Perhaps a list of characteristics that one would use to describe some successful female leaders of today, but this woman lived in the 11th century!

Matilde’s family ruled much of Northern Italy, which she formally inherited in 1076. She formed a close relationship with the Popes, using her military armies and fortress-like castles to protect them and her people from invading emperors. I visited a Matilde castle on the Emilia-Romagna/Tuscany border – one of 5 castles strategically perched high in the Apennine mountains that could signal each other if the enemy was approaching.

The walk up to Castello di Carpineti today is very peaceful. Birds singing, the wind in the trees, some far-away tractor in a field.  I passed a wooden painting of Matilde propped up against an old shed and across from the painting on a small hill were hundreds of wild poppies. A lovely view for Matilde! Further up the path were more of these delicate flowers, softening some of the harshness of the crumbling stone castle (11th century castles aren’t very “pretty”).

And as poppies have a significance in Canada as a symbol of respect for the military and those who fight for our freedom, I found it fitting that these wild poppies also graced the grounds of this extraordinary woman.

My Mini Vacation piece #78 is painted from a photo of Matilde’s view of the poppies.

(Available for purchase at local art fairs this July, and at my Etsy Shop later this summer if still available)

By Art We Wonderful by Marion Younan
On June 28, 2017
Leave a comment

Do you love the adventure of grocery shopping when you travel? I do, so that’s why this stall in Barcelona’s Boqueria Market stopped me in my tracks - what’s that sauce, what’s in that bag? 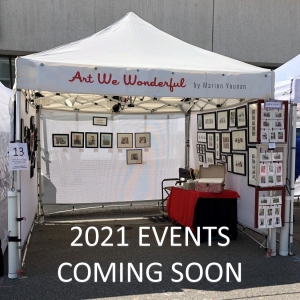 Are you condiments-curious? Are you like me and have more condiments in your fridge than actual food to serve them on or with? The condiments aisle is my favourite in […]
Satisfying My Grocery-Tourism

A Stairway in Paradise

If you’ve ever been to an Italian town, you’ll often come across its main church, or Duomo, in the town’s biggest square or piazza. In the town of Amalfi, the […]
A Stairway in Paradise

When In Rome… Look Through All Keyholes!

For my friend Deb’s first visit to Rome (and my […]
When In Rome… Look Through All Keyholes!

Lost In Those Views… Again

As the world opens up to travellers again, where’s the first place you’ll go? I’ve seen this prompt a lot lately on social media, as vaccinations roll out and we’re […]
Lost In Those Views… Again

Lucca From The Guinigi Tower

I have a tremendous fear of heights. Over the years, I’ve followed the advice to face that fear, and I’ve forced myself to go up to high places. Each time […]
Lucca From The Guinigi Tower

Who loves Aperitivo time? Before 2006, I really had no idea what it was! Aperitivo is a pre-dinner drink usually accompanied by a bevy of small snacks. Some of you […]
Good Company, Good Cheese And A View

I heard on TV yesterday that spring is a month away. What? During our pandemic lockdowns, time has taken on this new characteristic of seeming to move simultaneously at a […]
A Sign Of Spring

The first time I saw Camogli was nothing more than a quick glimpse from a train in 2006… and I was smitten. As the train to Milan slowly pulled into […]
Fourth Time’s A Charm!
Loading Comments...
Comment
×
%d bloggers like this: